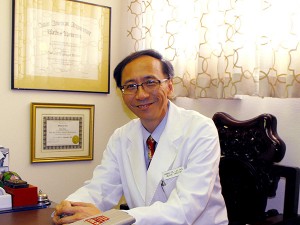 Dr. Thomas G. Lee has practiced in California for over 30 years as a State Licensed Acupuncturist (L.Ac.). He holds Ph.D. degrees in Acupuncture Medicine and Oriental Medicine, both from Asian American University in San Diego, California.

In 1983 Dr. Lee immigrated to the United States, settled in Los Angeles, California, and passed his Board licensing exam in the same year. In 1985 he opened his Glendale, California, office. From 2002 to 2012 he expanded with a Santa Monica branch office. In 2005 he moved his practice from Glendale to South Pasadena, where he is currently located.

It is interesting to note that prior to entering the field of acupuncture, an ancient Chinese tradition already in existence for over 4000 years, Dr. Lee’s original intent was to become a medical doctor. He had obtained a Pharmaceutical Bachelor’s degree from Taipei Medical College and held a pharmacist license in Taiwan. While he was enrolled at the National Defense Medical College studying medicine, he had a chance to step outside the official curriculum and take selective classes with an internship in acupuncture.

It was during his internship in acupuncture that he noticed the dramatic effect acupuncture had on patients. He saw patients in dire situations turn their health around and go on to live productive lives. By watching patients completely heal through the miracle of acupuncture, Dr. Lee’s enthusiasm for it grew, while his enthusiasm for allopathic medicine waned.

He eventually made the incredibly difficult decision to leave medical school and focus all his attention on acupuncture, which coincided with his lifelong dream of becoming a healing physician. You can only imagine the disappointment his parents suffered when he informed them he was dropping out of medicine to focus his studies and professional career on acupuncture! It took time, but his parents would eventually come to appreciate his dedication to acupuncture and Traditional Chinese Medicine, and give their son their full support.

Throughout his career he has been interviewed extensively by major mainstream and Chinese American news media. He is passionately involved in legislation reform for his profession, both statewide and nationwide. In addition, he has extended his influence and connections with other colleagues in foreign professional organizations by attending international meetings and symposiums in mainland China, Taiwan, Japan, Southeast Asia, Europe, South America, Canada, Australia and New Zealand.

Dr. Lee has been an academic instructor at SAMRA and ROYAL Universities of Acupuncture and Oriental Medicine in Los Angeles, California. He has also lectured to continuing education classes and small intensive study groups for several acupuncture associations. In addition, Dr. Lee has authored multiple articles and columns about acupuncture and Traditional Chinese Medicine that have been published in many well known newspapers and journals.

He has received numerous civic awards of recognition and honors due to his work promoting Acupuncture and Traditional Chinese Medicine. In 2014 UCLA’s Center for Oral History Research chose him as one of the 10 outstanding Southern California Chinese American immigrants interviewed for the UCLA Library’s Special Collections. He was honored to participate and to tell not only his own story but to speak in support of Acupuncture and Traditional Chinese Medicine.

Thousands of patients have been helped during Dr. Lee’s 30 years of practice. His expertise in treatment comes not only from his vast experience, but also from the heart and wisdom of one who has truly dedicated himself to the healing profession. He believes his life’s purpose is to help guide others in their return to wellness.

Wherever you are on the health continuum, whether you are injured, ill, or in the best of health and looking to nurture and maintain this condition, Dr. Lee is here, waiting to help you. He has the compassion, tools, skills and years of experience to get you back to the balanced, healthy state that you seek.